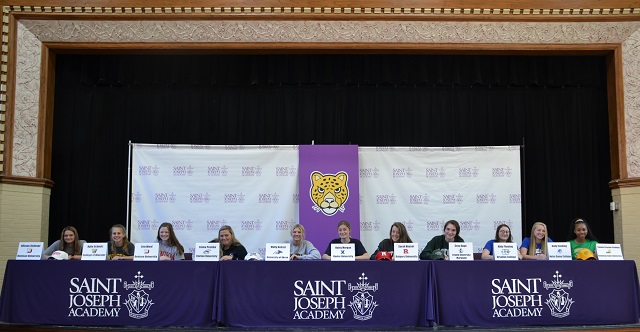 Saint Joseph Academy celebrated 11 outstanding student-athletes on Monday who were recognized at The Academy’s annual college signing ceremony.  The 11 Jaguars recognized were:

Timmia Crayton-Prioleau will be joining the track and field team at Kentucky State University.  She is a four-year letterwinner of the Indoor and Outdoor track and field teams as well a member of the cross country team.  Timmia was a 2018 Indoor Track state qualifier in the 4×200 and 4×400 relays and a 2018 regional qualifier in the long jump during the outdoor season.  Last spring she was part of the 4×200 North Coast League (NCL) championship relay team while also being the NCL Runner-Up in the long jump.  She is a part of the long jump relay team that holds the school record at SJA.  Most recently she competed in the long jump and 4×200 relay team at the 2019 Indoor Track state meet. In 2016 as a freshman, she participated in the OHSAA Track and Field state meet in the 4×200 relay.  In 2017, she advanced to the regional outdoor meet in both the 4×200 relay and the 400 meter dash.  Last week at the NCL meet, she earned second-team all-conference honors with her second place performance in the 300 meter hurdles.

Kady Cushing, a four-year member of the SJA varsity soccer team, will continue her academic and athletic career at Notre Dame College.  As a senior, she earned First-Team All-Conference honors as well as Second-Team All-District.  She was the SJA Defensive Player of the Year as a senior and junior.  Following her junior season, she was named Second-Team All-District.  She was a three-year letterwinner for the Jaguars.

Abby Fleming will continue her swimming career at Ursuline College.  Abby was a four-year member of the swimming & diving program and lettered each of her seasons for the Jaguars.  Abby was a two-time district qualifier competing in relay events.

Cecy Guye had a decorated career for the SJA volleyball team and will continue her career at NCAA Division 1 Loyola University Maryland.  During her four-year career at SJA, she helped lead the Jaguar volleyball team to unprecedented heights.  She lettered as a freshman as the Jaguars won their first district title.  As a sophomore and junior, Guye led the Jaguars to both district titles and regional titles with an appearance in the Final Four each season and a Division 1 State Runner-Up finish in 2017.  During her senior season, she earned North Coast League Offensive MVP and First-Team All-District.  In her four years at SJA, the Jaguars went 87-22 overall.

Sarah Houser will carry on the tradition of SJA crew sending rowers to Rutgers University.  Houser will begin her career in New Jersey just as Sarah Johanek from the SJA class of 2015 finishes her successful career rowing at Rutgers.  Sarah has been a captain for SJA crew for the last two seasons and has been a member of fall and spring crew all eight semesters at SJA.  She earned a varsity letter her sophomore year, was named Most Improved as a junior and has been a three-time participant at the national regatta with hopes to make it back again this year.  Last year at nationals, she was a member of the Varsity 4+ boat that finished 10th in the country.

Haley Morgan is the reigning North Coast League track and field MVP and will head to Xavier University to compete for the NCAA Division 1 Musketeers. At last week’s NCL meet, she won two events (200 meter dash and 4×200 meter relay) while also finishing second in the 400 meter run where she set the school record.  Last year, she won three events at the NCL meet and finished second in one to earn NCL MVP honors.  She was an outdoor state qualifier in two events (4 x 200 relay, 4 x 100 relay) her freshman year followed by competing at regionals her sophomore year.  As a junior, she qualified for the indoor state meet in two events (4 x 100 relay and 4 x 200 relay) and then this year she qualified for the indoor state meet in four events.

Molly Neitzel will be joining her sister Colleen Neitzel ’18 on the basketball team at the University of Akron.  Molly had an outstanding basketball career at SJA.  She helped lead the Jaguars to their first district title in 2018.  As a senior, she was named the Defensive MVP of the North Coast League as well as earning First-Team All-league honors.  She was also named to the All-District First Team, a year after being named Honorable Mention All-District, and this year earned All-Ohio Special Mention Honors.  She was named the SJA Team MVP her sophomore, junior and senior seasons.  Molly was also a key contributor for the SJA volleyball team which appeared in two Final Fours and won three district titles and two regional titles in her four years at SJA.

Kylie Schmitz is a four-year letterwinner in both the soccer and softball at SJA.  She will continue her soccer and academic careers at The College of Wooster.  She is a scholar-athlete award winner and won the coaches award in softball.  As a goalkeeper for the SJA soccer program, she ranks in the top four in careers saves while also owning the school record for saves in a game.

Erin Ward will be heading to Denison University to continue her rugby career.  Prior to joining the rugby team, Erin played both soccer and basketball at SJA.  Erin just started with rugby her junior year but has made an immediate impact on her team and in the in the sport.  Last year, as a first-year member of the rugby program she earned Rookie of the Year honors.  This year, she currently has the most tries in the state of Ohio for Division 1 high school girls rugby.

Allexus Zielinski will join Erin Ward on the rugby team at Denison University.  Allexus will be a four-year letterwinner as a member of the Saint Joseph Academy rugby team.  She also participated for the All-Ohio Select Side team along with being selected to the All-Midwest Thunderbird team.

Congratulations to these Jagaurs and best of luck to them as they begin their collegiate careers!