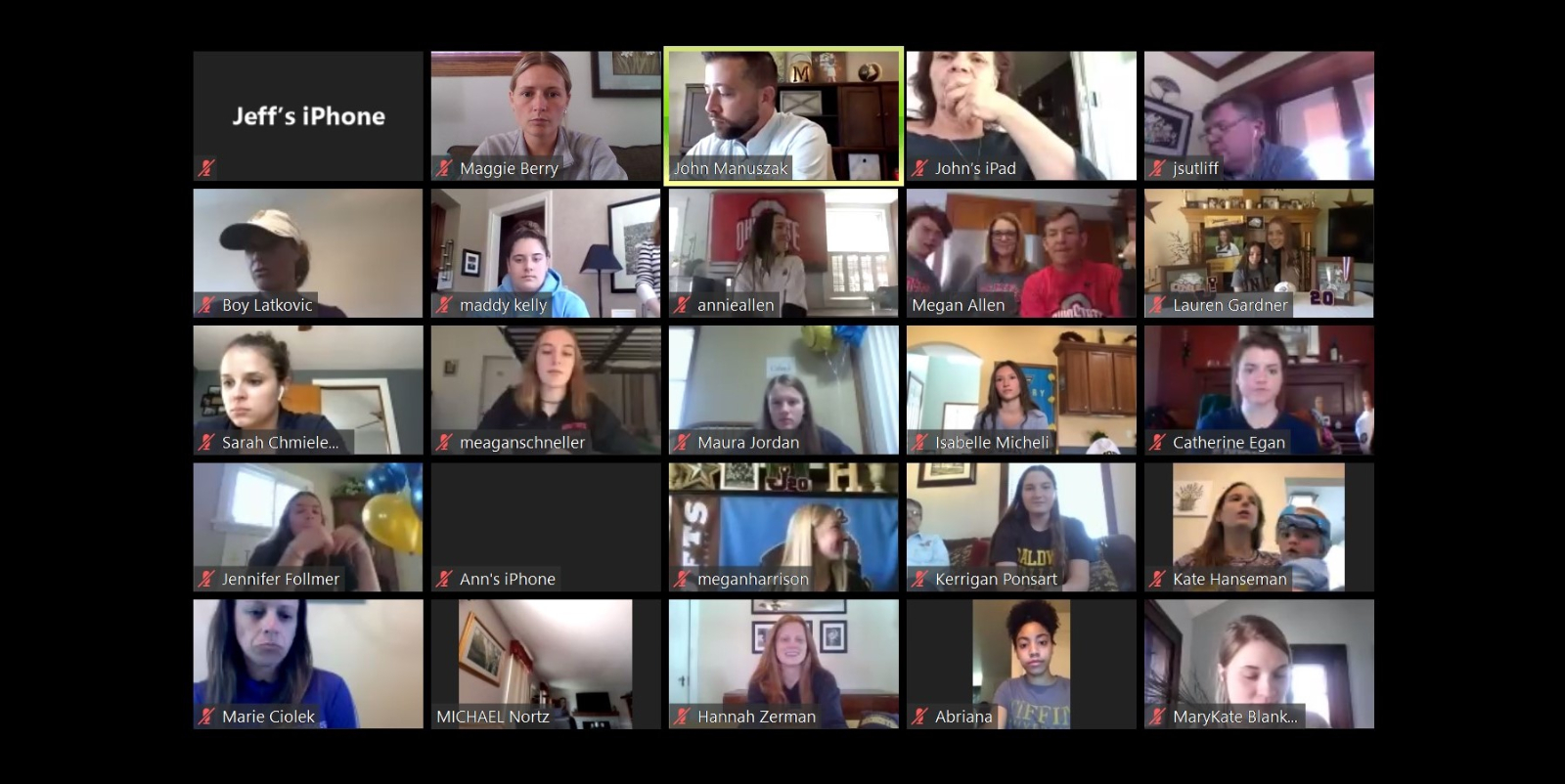 Saint Joseph Academy celebrated 14 outstanding student-athletes on Wednesday who were recognized virtually during the Academy’s annual college signing ceremony.  You can watch the virtual signing day, which was held on Zoom, by clicking HERE.

The 14 Jaguars recognized were:

Annie Allen will graduate from Saint Joseph Academy as one of the most decorated athletes in SJA history. In cross country, she competed at the OHSAA state meet all four years at SJA placing 16th in 2016, 21st in 2017, 17th in 2018 and 18th as a senior this fall.  With those finishes, she became the first four-time All-Ohio athlete in school history.  Her 7th place finish at the regional meet in 2019 helped lead the Jaguars to the regional championship, the first for SJA since 2002.  She is a two-time North Coast League MVP and league meet champion in cross country while also having the 2nd-fastest cross country time in school history (18:17) set in 2016.  In outdoor track & field, Annie is a two-time state qualifier and a two-time All-Ohio award winner.  Last spring, she finished 11th at the state meet in the 3200 meter run in addition to being named the North Coast League Most Valuable Runner.  In 2018, she finished 9th at the state meet in the 1600 meter run in a school-record time while also competing at state in the 4×800 relay.  She won the 1600 meter run and 3200 meter run at the NCL meet in both 2018 and 2019.  As a member of the indoor track & field team, she is a three-time state qualifier.  In 2020 and 2019, she was a state indoor qualifier in the 4×800 relay.  Last year, she also competed at state individually in the 1600 meter run and this year competed in the 3200 meter run.  Both years, her 4×800 relay team qualified for the New Balance National meet.  In 2018, she finished 6th at state in a school record time to earn All-Ohio honors.  She is the indoor track & field school record holder in both the 1600 meter run and the 3200 meter run  and also is part of school records for the 4×800 relay in both indoor and outdoor track.  She will also graduate with the awesome accomplishment of being a 12-time letterwinner at SJA.

Bri Boyer has been a three-year member of both the indoor and outdoor track and field teams at Saint Joseph Academy.  Bri was a very important part of the sprinting group at SJA during her time.  She has run the 100 meter dash, 200 meter dash and has also been part of the 4×100, 4×200 and 4×400 relay teams.  This season, the coaching staff was transitioning Bri to a hurdler as well and she responded very well which is great as she may compete in hurdles at Tiffin.  Our coaching staff is so complimentary of Bri and really emphasized what a hard-worker she is, along with being a very team-focused athlete who was great at encouraging her teammates throughout the years.

Catherine Egan is our first of three members of our crew program to be recognized today.  Catherine will be heading to Duquesne University in Pittsburgh to row for the Dukes.  Catherine was a four-year member of the crew program in both the fall and spring seasons and was a three-year letterwinner.  Catherine has been a part of some of the most successful boats in SJA crew history.  In the spring of 2018, she was a member of the varsity lightweight boat that advanced to the Finals at the National Championship regatta where they finished 5th overall in the country in the lightweight 4 category.  Last spring, she also advanced to nationals in the same event where they finished 8th overall in the country.  She also received the “Jaguar Pride” award in the spring of 2017.

Jenn Follmer will head to University Heights to play volleyball at John Carroll University.  Jenn’s story is certainly one of commitment and dedication as she overcame an injury as a junior to come back and play volleyball her senior year.  Jenn was a second-team All-North Coast League selection this past fall.  Jenn helped lead the volleyball team to a district title in 2019 and was part of the 2017 team that finished as the Division 1 State Runner-Up.  Along the way, Jenn was certainly a team leader for the Jaguars and she will definitely be missed.

Lauren Gardner played a huge role in the success of SJA volleyball during her time at The Academy as she was a three-year letterwinner.  Individually she has been honored with the team’s Defensive MVP award twice, Honorable Mention All-North Coast League in 2018 and Second Team All-League this past season.  Lauren was in the starting lineup as a sophomore in the Division 1 state championship game and was a key back row starter for this year’s district championship team.  Lauren will be following in the footsteps of our assistant coach, Coach Andrew Woodward, who played collegiate volleyball at Ohio Northern as well.

Megan Harrison will be continuing her volleyball career at Tufts University.  Megan was a member of the 2017 state runner-up team and a three-year varsity member of the volleyball program.  She finished her SJA volleyball career with a district championship and an appearance at Regionals this past fall.  She was also a North Coast League honorable mention selection for the Jaguars in 2019.   Megan was also a starter on the very successful Jaguar softball team.

Maura Jordan participated in athletics all 12 seasons at SJA and earned nine letters during this time – 4 in indoor track, 4 in outdoor track and 1 in cross country.  She was a key contributor on the track and field teams that captured North Coast League titles in each of the last two seasons and also cross country teams that won the NCL title three years in a row, including this past fall.  She also helped lead the Jaguars to district runner-up finishes in track each of the last two seasons.  She was just named the Most Valuable sprinter for the indoor track season and was a first-team all NCL performer in track and field last year.

Maddy Kelly leaves SJA as the best swimmer in school history.  She holds six individual school records and is a member of the school record relay teams in all three relay events.  She is a four-year letterwinner, won the team MVP award 4 times, was the North Coast League Most Valuable Swimmer twice, was a USA Swimming All-American, a district champion and probably the highlight of all that – a four-time state qualifier.  This past winter, she finished her decorated career with two All-Ohio performances.  She was 12th in the 50 freestyle and then finished a career-best 6th overall in the 100 backstroke in her final swim for SJA.

Amanda Keim has been a vital member of the cross country, indoor and outdoor track and field teams over the last four years.  Amanda was a cross country captain this fall.  She has received numerous awards including being a first-team All-North Coast League selection in cross country twice and in track twice.  She was an All-Ohio runner in indoor track, an Academic All-Ohio selection twice in cross country and once in track.  She played a major role in the success that her team’s had during her time at SJA.  Amanda qualified for state in cross country three times, including this year as the Jaguars won the regional title.  She also was a three-time state qualifier for indoor track and competed at state last year at the outdoor state meet.  She is part of the 4×800 school record relay team and has the 8th fastest cross country time in school history.  She also was an indoor national qualifier as both a junior and senior.  Amanda finishes her SJA career as a 12-time letterwinner!

Izzy Micheli will be playing volleyball at Emory University and certainly played such an important role in the success of SJA volleyball over the last four years.  Izzy is a four year varsity player who won three district titles in her career and was a starter on that 2017 team that was the state runner-up.  The past two seasons in the North Coast League, she earned Conference Defensive player of the year awards while also being named First-Team All-NCL in both seasons.  In 2018, she was named honorable mention all-district and then this year was a first-team all district selection.

Kerrigan Ponsart has been a four-year member of the tennis program at Saint Joseph Academy.  She ends her SJA career in fifth place all-time for total wins – as she won 66 matches in her four year career.  That includes a 20-win season this past fall as a senior.  Also this fall, she made her first appearance in the district tournament when she competed in doubles.  This fall, she was named Second-Team All North Coast League.  As a junior she captured the league’s third singles title which earned her First-Team All-NCL recognition.  She is also following in the footsteps of our head tennis coach, Mr. Dan Mitoff, who was a tennis player during his college days at BW. \

Meagan Schneller will be heading to The Ohio State University to row for the Buckeyes. Meagan is a three-year member of the crew team, rowing six total semesters. During her Novice Season, Meagan earned a silver medal at the Midwest Scholastic Championship Regatta in the Novice 4+. While on the varsity team, Meagan earned seats in the team’s fastest boat, the Varsity 4+. During her junior year, Meagan was a part of the Varsity 4+ that took second at Midwest and finished 8th in the same event at the National Championship Regatta. Meagan holds the 6th overall fastest 2k time for SJA Rowers and received the “Jaguar Pride” award in the spring of 2018.

Sia Schraff is a member of our rugby program which has now had at least one rugby player move on to play collegiately in each of the last four years.  Sia will be playing at Lindenwood University which is widely regarded as one of the top Division 1 women’s rugby programs in the country.  She will be joining a fellow Jaguar on that team as she will be playing alongside Annie Rolf from the Class of 2017. Sia has helped the Jaguars to a state runner-up finish last season and a 2018 state Final Four appearance.

Hannah Zerman will be heading to the University of Rochester to row for the Yellowjackets. Hannah is a four-year member of the crew program, rowing eight semesters and is a three-year letterwinner. As a freshman, Hannah finished 2nd in both the Novice Lightweight 4+ and Freshman 8+ at the Midwest Scholastic Championship Regatta. Her Freshman 8+ also competed at the National Championship Regatta. Since her Sophomore year, Hannah has earned a seat in the team’s top boat, the Varsity 8+, every year. In the spring of 2018, she was a member of the varsity lightweight 4+ and finished 5th in the country. Last spring, she also advanced to the National Championship Regatta in the same event where they finished 8th overall in the country. Hannah holds the 6th fastest 2k time for SJA Lightweight Rowers and is a recipient of the team’s “Great Eight Award”.

Congratulations to these Jagaurs and best of luck to them as they begin their collegiate careers!