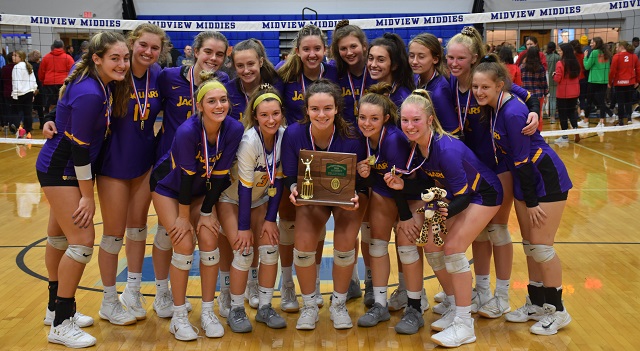 Saint Joseph Academy captured its fourth district championship in five years on Saturday afternoon as the top-seeded Jaguars topped Magnificat (25-17, 25-15, 26-28, 25-22). After three consecutive district crowns in 2015, 2016 and 2017, the Jaguars were hungry to return to regionals and they certainly played like it in the district final.

SJA got off to a hot start in the match and dominated the first two sets to open up a 2-0 lead. Magnificat rallied back in a tight third set and eventually pushed the match to a fourth set. In the fourth set, the Jaguars jumped out to a big early lead before closing out the match on a Heaven Bartell ace.

The Jaguars will take on Toledo St. Ursula in the regional semifinal on Thursday at 6:00 p.m.  That match will be the first of a regional doubleheader and will begin at 6:00 p.m.  Ticket information will be communicated on Monday.