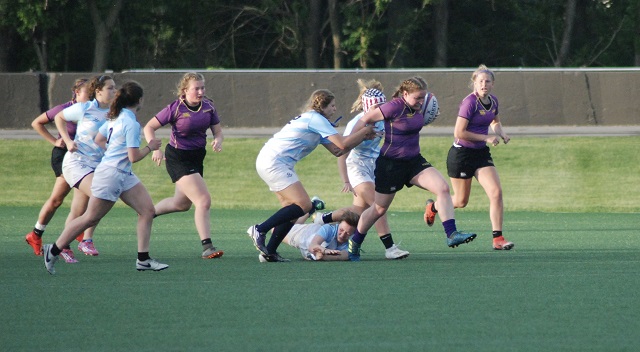 This past Saturday, the Jaguars made a trip down to Columbus’ Fortress Obetz for their state semi-final matchup vs. the reigning state champion Hudson squad. This was a rematch of an early season matchup that resulted in a 60-21 victory for the Jaguars. Both teams have come a long way since then and the game did not disappoint.

The action started fast with the Jaguars capitalizing on early field position as Sia Schraff ‘20 took a short clearing kick around the corner for 5. With the tough angle, Kate Pofok ‘21 pushed the conversion to the right. Six minutes after that, Erin Ward ‘19 hit a gap at full speed and broke through after several phases of attack. She would not be caught on her way to a 60 meter try. Pofok ‘21 hit the conversion. Again capitalizing on great field position Lizzy Fox ‘19 picked up the ball on a penalty advantage inside the 10 meter and crossed it over for a try. Kate Pofok ‘21 hit the conversion, her second of the day, making the score 19-0.

Shortly after their third score, the momentum shifted and Hudson found some traction. They kept the ball in tight and advanced the ball off of the fringe of the breakdown catching the Jaguars off guard. Hudson was able to ride this momentum on their way to scoring 19 unanswered points during the back half of the first period knotting the score at 19 for the half.

Halftime provided an opportunity for a few adjustments, and for the senior leaders to take over and get that momentum back. It was just what they needed. Ten minutes into the new period and after several phases of attack, Mackenzy Burns dotted the ball down to start the second half surge. With another tough angle, Pofok ‘21 just missed the conversion. With the new momentum, the Jaguars turned things up a notch and kept scoring. At the 43 minute mark, Allexus Zielinski ‘19 broke through for her first of the day. That was then followed up 7 minutes later as Kate Pofok ‘21 took a flat pass, cut inside through a tackler and crossed the try line for 5. She converted both of these tries making the score 38-19 with 10 minutes left. The final score of the day came as Allexus Zielinski finished in the corner pushing the score to 43-19 which ended up being the final.

The Jaguar’s conditioning was definitely the difference in the second half. Punishing runs by Frankie Burns ‘19 and great energy out of Lizzy Fox regained the momentum and there was no turning back. The Jaguars are looking to keep that momentum going into the coming weekend with a return to the Rugby Ohio state championship game. They will face off against Cincinnati power Walnut Hills. The game will be at 1:00 p.m. at Fortress Obetz near Columbus.